The Life and Continuing Message Of Dr. James F. Hubbard 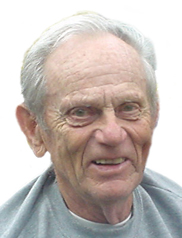 James Frederick Hubbard was born on March 13, 1921, in Talledega, Alabama. He was the youngest of three brothers. The family moved to Hollywood, Florida, when Jim was 15 years old for health reasons involving his father. Shortly thereafter they moved back to Talledega and eventually to Bon Air, Virginia, outside of Richmond. Jim graduated from John Marshall High School there in 1939.

After high school Jim got a job as a mail clerk at a local bank and took morning classes at the University of Richmond. He purchased a Model A Ford for $35.00, and his best friend Sam and he went to Ft. Lauderdale for a vacation.

Drafted in 1942, Jim served the efforts of World War II as a member of the Medical Corp. on the European front. After the war he continued his studies at the University of Richmond graduating with a BA in Psychology in 1948. He was honored by Phi Beta Kappa for his outstanding achievements.

Jim attended Union Seminary in Richmond to study to become a Presbyterian Minister. While at the Seminary he met and courted Ellen Collins. They were married on December 17, 1950.

Rev. Hubbard's first church assigment was in Kannapolis, North Carolina. During his two years here a daughter, Mary Ann, was born. In 1952 he was called to a church in Parsons, West Virginia. In Parsons a son, Frederick, was born in 1954.

Jim decided in 1955 to return to the University of Richmond to continue his studies in Psychology. He received his Masters in 1958.

In 1959 the family moved to Laurinburg, North Carolina, and Jim took a teaching position at Presbyterian Junior College in nearby Maxton. This led a position at the newly created St. Andrews Presbyterian College in Laurinburg a short time later. In 1965 he was offered a position in the Psychology Department at Pembroke State University (now UNC - Pembroke). He taught here until his retirement in 1986.

During his tenure at Pembroke, Professor Hubbard did continuing studies at Arizona State University during sabbaticals in 1967 and 1972. Due to unexpected family difficulties during this time his P.H.D in Psychology was not completed although the majority of his hours of study were done.

On May 6, 2006, UNC - Pembroke bestowed an Honorary Doctorate to James F. Hubbard in honor of his continued work as a professor and his committment to the growth of the university and its students.

After an enjoyable retirement of travel, gardening, bridge, and choir, Dr. Hubbard suffered a fall shortly before his 90th birthday. After a few weeks in nursing care he moved to an assisted living facility. He recovered some strength and continued to be as active as possible. In the early morning of June 4, 2011, he suffered heart failure and passed away quietly in his sleep. 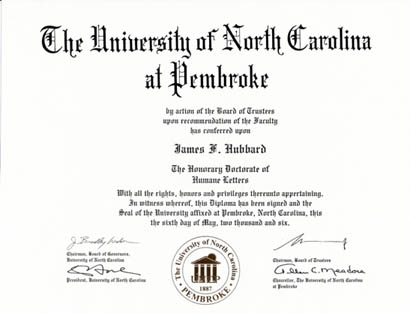